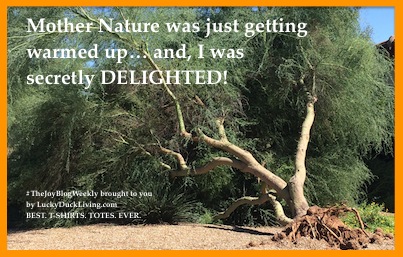 One of the things I love about living in Arizona is that — other than the summer heat – we really don’t have a lot of natural disasters. I find this a true bonus having lived through several BIG earthquakes in Los Angeles. Plus, we have LOTS of free parking here! But, that’s for another article;)

Another thing we have during the hot summer months are June Bugs… (a.k.a. Cicadas or Locusts) A musical hum fills the air for weeks, sometimes months at a time. It becomes a summer baseline that locals embrace. So…

We also have the Summer Monsoon season. Once the barometric pressure is at or above 50 for 3 days in a row it officially starts… and with it are HEAVY downpours.

And by downpour, I mean it dumps for a couple of hours in the afternoon, we have flash floods that pass through… the next day or two it dumps again with brief flooding and cycles like this creating the most delicious mid-summer temperatures, skin plumping atmosphere and a good drenching to the thirsty desert.

This year, however, we had a 100-year flood. It dumped for a couple hours, and then kept on going. People were literally canoeing down their streets.

Yet, this year Mother Nature was just getting warmed up… and secretly, I was delighted.

Let me preface this by saying that taking a “storm chasers” adventure holiday is on my bucket list.

So, when several days ago I saw ominous, dense, volcanic like clouds hovering over my neighborhood mountain, I was deliriously happy!

The blue sky remained directly above as I went into the market, and five minutes later there were 70 mile an hour winds literally uprooting and splitting trees in half scattering them like straws around the parking lot.

You know some damage is done when the store makes an announcement… “uh… could the owner of the silver convertible Mercedes please come to the front.” Oy-vey!

Within several more minutes, there was a RIVER flowing through the parking lot and toward the main street.

Although, the rains diminished to a sprinkle within 15 minutes, the roads were flooded with a torrent of water and many of them blocked by fallen trees.

Now is when the real magic started…

A group of us huddled by the front door watching nature’s display. The manager then had several of the employees grab umbrellas and help customers get safely to their vehicles. I declined, but then when I was putting my cart away, another patron rushed to help me.

The spirit of coming together in adversity was in motion.

As I approached home I found the road blocked with a fallen tree. My four-wheel-drive took me up onto the sidewalk and around to get in my driveway. But those behind me were stranded. That was until moments later a landscaper pulled his truck around and pulled out a chainsaw to clear the path for all! What a generous spirit.

And so it goes… the evening news was filled with story after story of goodwill helping those hardest hit by the storm.

It may take a while for the flood to recede, or the trees to be cleared… but together we can forge ahead.

So next time you feel yourself getting lost in the chaos of a storm – whether physical or emotional – take comfort in knowing that it’s likely nothing more than an opportunity to get closer to those around you and simultaneously transform the dark into a building block for a brighter experience overall.

Life is a process, a cycle of events, a never-ending experience of giving and receiving.

I am delighted that we get to take this journey together.  And remember, I am definitely in your corner!