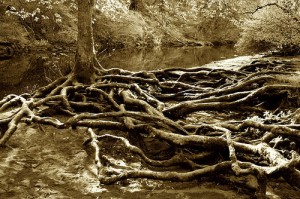 Many of you love to garden, as do I. Or, at the very least we can appreciate the beauty of one.

Unwanted weeds are a reality, and every time I pull one up I am reminded of a long ago sermon comparing weeding our garden to plucking bad attitudes and habits from your life.

The key point he made was that negativity, much like weeds, are a lot easier to get rid of when they are just a sprout.

He embedded a visceral desire in me to not let defects grow to the point that they become deeply embedded.

Over twenty years later and I still remember his powerful talk!

Even so, as I was clearing out the weeds in some landscaping yesterday, I again noticed the beast of a shrub — once an itty-bitty weed — that was now thriving in the corner.

The reason I originally let it grow was that it had thorns on it. And, every time I was out there watering, I never seemed to have my gloves. Then it got bigger, and situated itself behind a drainpipe and was hard to reach, so I cut it with pruning shears, which of course make it stronger, thicker and more deeply rooted!

But this was going to be the day to clear it away. No more excuses.

Protected with gloves I tried like the dickens to pull it out and quickly saw that brute force and willpower was not the way.

Then I considered again cutting it back… but, my weed demons took over and I considered for a moment that perhaps I don’t really need to remove it at all.

In a moment of inspiration I grabbed my spade and pushed it down into the earth around the roots. I circled it, breaking free the tiny roots that attached to the median roots. Then I pulled a bit more and continued with the spade until the median roots separated from the main root, and I was able to work the whole thing out after about twenty minutes. Phew!

How much of your life is like that? What negative attitudes or harmful habits were too thorny to grab hold of, or tricky to reach so you just learned to live with or manage them?

Have you tried to cut them back, only to find out that they’ve grow back stronger?

Are your difficulties now so established that it seems there is no way to be rid of them root and all?

Perhaps your solution is not will, or force or even strength…

I suggest that applying the spade principle to break apart your outlying emotional  “roots” will loosen things up enough to reach the median challenges and ultimately the core of your troubles.

I offer one simple tool that can be the beginning of your change.

If you’re not comfortable with the word “prayer.” Instead use wish, mantra, request, affirmation… whatever is comfortable for you.

There may be something completely different, or more than one that you think of. Just pick the first one that comes to mind, and start there.

In my prayer I’ll use angry as an example…

“ Please remove my need to be angry.”

I have found that this simple prayer — when said consistently — will always redirect you towards freedom.

It begins by separating you from the edges of your pain, and bit by bit you will be able to pull the problem out by the roots instead of only chopping it off at the ground.

What is your Achilles heel? What is the one thing that keeps you back? Makes you small? Steals your joy?

Asking for the need to be removed is a simple key to happiness that is ready and waiting to work for you.

I look forward to hearing from you on this.

In the meantime, I am most definitely in your corner…