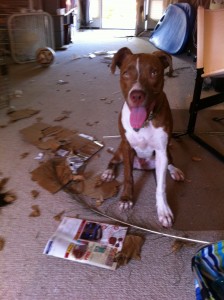 “So when you say bad dog, I assume you mean badass?”

As many of you know I adopted a pit bull pup last year that has grown into a magnificent canine companion — my Top Dog In Charge, Vito “The Toast” Corleone.

I was dedicated to making him the best bully ever, spending dozens of hours with dog trainers and socialization groups. The result was 5‑star.

He learned all the basic commands, some fun tricks and even earned his AKC Canine Good Citizen Certificate in the Spring just before he turned a year old. Impressive!

Then came the Arizona summer.

No walks. No park. And a break from his training. Most days I’d take a quick lap with him around our desert property where he could chase some rabbits and then cool off in the pool.

Basically, he was in summer camp mode, and frankly, so was I.

Last week I decided to start back with his regular schooling and he wasn’t really responding like I hoped.

Then I had a moment where I heard myself from the outside, and realized I didn’t know what I really wanted him to do.

Does “all right,” mean that he’s all done, OR that he can release from his sit and follow me? Does “easy” mean stay close, or slow down?  Does sit mean sit/stay and if he doesn’t stay is that ok?

What I realized is that I was confused, and so was he.

How can he even hope to respond if I’m not clear?

My first thought was that I need to write everything down. Write out all the commands and exactly what I want from each. Easy enough; makes perfect sense, right?

The really interesting bit is that a week later — even though I’ve had the time — I haven’t done it. Even right now, just thinking about writing out the list makes my mind cramp up with resistance.

It’s Relationship 101 for cryin’ out loud; clearly communicating what you want. Yet here I am, opting for a wishy-washy, vague sort of idea about what I may possibly expect.

Don’t get me wrong my ability to roll with things is a tremendous asset that I cherish.

But, could it be that I’m not clear in other areas of my life?

I’ll never forget getting in an argument years ago with my ex, and in the middle of it he stopped and asked; “what is it that you want, Thais?” And, I looked at him completely stumped, and whimpered, “I don’t know, I just don’t want to feel like this.”

The degree of immaturity that spawned that reply has mostly subsided. But, I am reminded that there comes a time when it’s downright irresponsible to my own well-being and unfair to others to be unclear.

And if you’re unable to be clear, or unwilling to get clear, then perhaps you need to own that you’re the problem. Or, at a minimum, a contributor to how you’re feeling.

So, as I look at my shweet pup gazing at me with muddy paws on the white sofa, wondering if it’s playtime; I think perhaps a little clarity would do us both some good.

Can you relate to this?

• Do you send mixed messages depending on your mood and expect others to keep up?

• Are you resistant to being specific, because then you need to be committed, too?

• Is the benefit of being vague greater than the harm it does, or stress it causes?

Let’s get clear togetha my lovelies! What’s an area that you’re committed to growin’ up in?

I really want to hear from you on this one!

And, remember, I am most definitely in your corner…