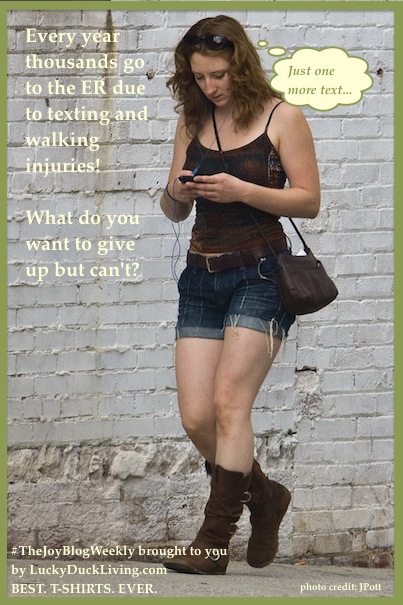 Today is four weeks into Lent.

Whether you observe this tradition or not, you are likely familiar with this Catholic ritual of giving up something for six weeks as an act of alignment with your faith.

Resolutions are not my thing, but the idea of expanding and deepening my spiritual life IS appealing.

This year I heard it suggested that practicing Lent is only worthwhile if I pick something that I would really consider a sacrifice.

For me that’s easy: Texting and Driving.

Sad to say, I have been one who regularly texts and drives. Despite knowing it’s unsafe (and illegal in some states), despite my VERY close calls and despite my inner knowing that I shouldn’t be doing it I COULDN’T STOP.

That was until a month ago. Before I could talk myself out of making a Lent commitment I took a breath, shot up a prayer and made the decision: No texting and driving until April 17th.

And an amazing thing happened… I haven’t texted and driven since.

I don’t know if it was the cumulative energy of so many people giving something up on the same day, Divine intervention or simply the power of making a decision, but I know what it wasn’t… It WASN’T willpower.

I have tried many, many MANY times to let go of this bad habit and it seemed IMPOSSIBLE.

Yet, I am in awe of how easy it has been. Not only has it been effortless, but the trickle down affect has been wonderful as well.

Other than safety, what’s the number one positive effect? I’m talking with friends more.

Not only did I stop texting in the car, but, it has retrained me to call instead of text. As a result I feel more connected in a meaningful way.

I used to think that texting kept me more connected because it was more frequent and so easy… but, what I’ve discovered is that it lacks the connection of voice tone, the hearing of laughter and the moment shared together.

With text you can send a note and it’s read 5 minutes later. When you talk with someone you’re sharing that exact moment together. And, the power of that connection is more necessary for your happiness than you can imagine.

So regardless of your religious or spiritual beliefs, what is it for you that you KNOW is time to let go of? Now… mindful of those beliefs, follow it up with the power of making a decision.

From this perspective, you will surely discover an ease not previously experienced. It is also likely that you will find yourself being more connected, joy-filled and grounded in your life and happiness than you could have ever managed on your own willpower.

In the meantime, remember that I am most definitely in your corner.